Sometimes it is difficult for me to keep an open mind about a new fragrance. I become so attached to my familiar favorites that I tend to create a set of almost moral value judgments regarding what is “good” or “bad” about a perfume. As a result I don’t step out of my fragrance comfort zone long enough to expand my horizons. Whenever this starts to happen I remind myself of the day I discovered Fidji.

In 1975 (or so) my ex and I arranged a ski vacation for the two of us and several friends to Cervinia, the resort on the Italian side of the Matterhorn (Monte Cervino). Our “crowd”, a group of skiers from Tehran, was used to the high and powdery slopes of Dezin (3,600 m) and to the steep, icy, difficult runs of nearby Shemshak. Cervinia, with its long, easy and open pistes at altitudes of up to 3,833 m, seemed like great fun and the perfect ski destination. Counter to expectations, we arrived to an unseasonably warm January in Italy. While the snow was abundant, if a bit soggy on the upper slopes, we had to negotiate rocks and even patches of grass as we approached the base. But all was not lost! We headed for the restaurants, discos and shops. It was there in the mountains, in a small boutique on a snow-covered corner of Cervinia that I met and fell madly for the perfume love of my life, Guy Laroche Fidji.

My first impression of Fidji was shocking and green. I had been brought up on various Lanvin, as well as on Shalimar and Jungle Gardenia. My Persian perfume oils were all roses, jasmine and musks from the bazaars of Tehran and Mashhad.

Fidji‘s top notes of galbanum and hyacinth, while totally Persian in character and production, combined with what I later learned was bergamot and lemon to create a scent so fresh and sharp that it was almost painful and nearly took my breath away. I was stunned and didn’t like it at all. I purchased a brown cashmere sweater and a ski “suit” and left the shop, compulsively sniffing my wrist.

As the perfume dried down in the cold mountain air I was warmed and seduced by jasmine, rose, ylang ylang and a spicy carnation. Later that afternoon I returned to the shop and purchased my first of many 14 ml Fidji parfums. As we danced the night away at the local clubs I could still detect the initial touch of my new fragrance lingering as musk and oakmoss.

Since that first purchase in Italy so many years ago there have been numerous bottles of Fidji in my life. In my current collection I have the original parfum as well as a reformulation, a flanker (Fidji du Soir) and what I believe to be a fake Fidji. Fidji du Soir was a deeper richer version which was released in 1977 to compete with the relaunch of the deep and rich Opium.

My initial surprising reaction to and enjoyment of this scent has never faded. This morning, when I opened my current, in-use bottle of parfum, I was once again magically transported to Cervinia in the 1970’s. Instead of the tropics suggested by the name, I smell snow and the crisp air of a mountain village resort and see the afternoon sunlight slanting through the windows of the tiny shop. The romance of Fidji was created entirely from my own experience. It wasn’t until many years later that I learned of the significance of Fidji’s famous print ads and about its legendary creator, Josephine Catapano (Norell, Youth-Dew, Cinnabar, Zen).

At this point in my narrative you might be wondering what does “In the Street of the Perfume-Sellers” have to do with snow and Fidji. This title refers to a little fable by the 11th century Persian poet and mystic, al Ghazali, the author of The Alchemy of Happiness. The parable, “In the Street of the Perfume-Sellers”, appears in Idris Shah’s collection of stories entitled Tales of the Dervishes originally published in 1967.

Here is an excerpt:

A scavenger, walking down the street of the perfume-sellers, fell down as if dead. People tried to revive him with sweet odours, but he only became worse. Finally, a former scavenger came along, and recognized the situation. He held something filthy under the man’s nose and he immediately revived calling out “This is indeed perfume!…

Is there a story, a fable (or a cautionary tale) behind the discovery of your favorite perfume? I’d love to hear it. 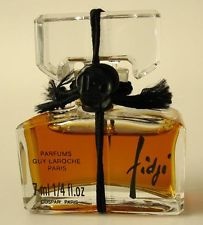 Fidji du Soir
Released in 1977 as a deeper richer version to compete with the deep and rich Opium. Discontinued but sometimes seen on ebay.

Further Reading
Yesterday’s Perfume – review
The Perfume Shrine – Fragrance Review and History
The Scented Salamander – One of the Greats: Perfumer, Josephine Catapano
Scent & Subversion – the book by Barbara Herman about vintage perfume is described by The Non-Blonde as “an unparalleled resource”.