A small mysterious package arrived on her doorstep wrapped in brown paper. The message attached read…

I immediately thought of you.

The unwrapping revealed crumpled yellow newspaper. The newspaper’s words spoke of long ago horse races, and sent the dust of 1934 flying dreamily through the air. 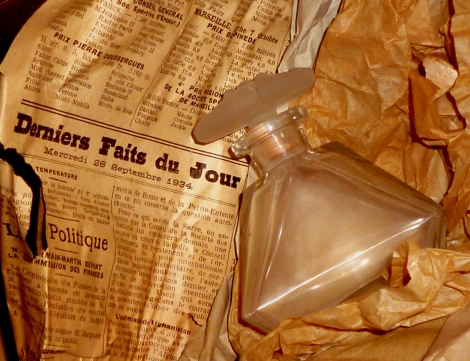 The unwrapping also revealed an old bottle, a relic of a time when the beauty of a bottle would be paired with a precious juice.

As she was a perfumista she knew she had to fill this bottle with a perfume worthy of this beauteous flacon. And strangely she had just completed her first perfume…

Her mind had found inspiration in the stables of the French Republican Guard and her own horseback riding at equestrian events. On day in Paris, as she was walking past the elite cavalry stables, the smell of horses, hay, and hackamores mingled with a bouquet of lilies which was wafting by in the arms of a woman. This intense smellscape had remained with her ever since. She wanted this remembered and now completed fragrance to flow into this one bottle which she had futher imagined into smelling like a dance between a Hussar and a Courtesan. 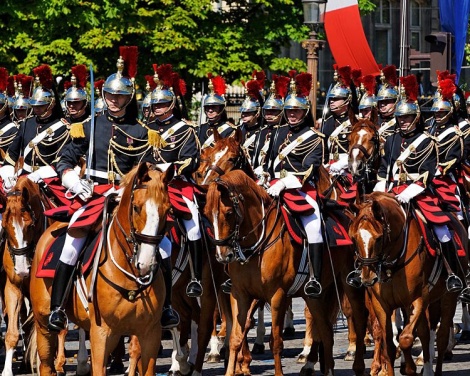 Previously a conversation with François Hénin at Jovoy had led to an introduction to perfumer Amelie Bourgeois who had composed a leather and lily dance around a hay stack. With Jovoy acting as patron the fragrance was finally poured into one bottle. 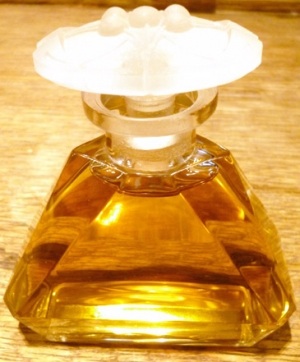 Did I say one bottle? As it turned out the small mysterious package had contained 1 out of 100 matching antique bottles designed and manufactured at the Brosse glass factory in the 1930’s. These bottles are only available at Jovoy and as I write there are only 54 bottles remaining from this 100 bottle 2013 release.

As Annabelle, the creative director of this fragrance and on whose doorstep the package appeared would say… 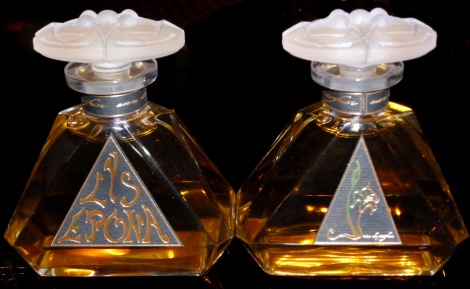 I have not smelt Lys Epona but I would consider this to be a collector’s item. Of course it is also possible that this scent will be released in modern glass 2nd edition bottles. 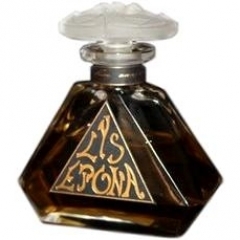 *Ravensara – Perfume Analyst Kafka will introduce you to this ingredient here.

From her great height atop the cliffs, she could gaze at her realm and the fields of yellow, green and gold below her. The Celtic princess was astride a large white stallion, garbed in a softly burnished, slightly musky, brown leather cuirass, and draped with white lilies. Her skirt was made of hay, wheat and grass; her skin was coated in ambered oil; and her long hair braided with daffodils that matched the flowers in her horse’s mane. Behind her were her clansmen, giant warriors silent in leather and white flowers. As they rode down to pay homage to the shrine of Epona, the scent of their horses, leather, and lilies mingled in the air, floating like tendrils over the fields of daffodils, grass, wheat, and dry hay. It is the fragrance of Lys Epona. 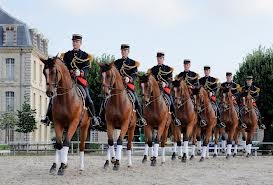 Note: Hackamore bridles are not used by the French Republican Guard but alliterative license is used by Jordan River. Bridle me!

7 responses to “A mysterious package arrived on her doorstep…”