The Fragrant Man is very pleased to introduce you to Amer, our new guest writer. Amer is Greek, and when not working as an architect, he is an amateur explorer in the art of perfumery – we found him in the comments section of the Fleus de Web post, where he delivered an extraordinary review of Multiflore.

“The limpid body of the sleeping faun is now cradled by the forest floor, but underneath the cover of foliage, the pulse of a beating animalic heart can still be detected in the form of an ambery oud.”
– Amer’s take on Multiflore

He says, “I am not an avid collector of bottles and samples but I sniff and analyse whatever I can get within sniffing distance of”. Amer credits his analytical nose in helping him on his quest to better understand perfume, and says he knows natural essences well enough to recognise their behaviour in a composition. He has also commented on The Quantum Unicorn Accord.

His favourite scents are (in no particular order): Eau de Gentiane Blanche, Philosykos and Lumiere Noire Pour Homme. An honourable mention goes to the original formulation of Dior Homme – “It is a fond memory that marked a period of my life,” says Amer.

His favourite note is the orris – “I am always on a quest to find the perfect one”. Amer also believes in “perfumery on a budget” and says that the price of a perfume is part of his overall feelings of it. “Perfume is not simply a work of art, but also a product,” he says.

Amer’s first post will be a review of one of his favourites – Eau de Gentiane Blanche, by Jean-Claude Ellena for Hermès.

After careful consideration – and one ficticious fragrance review – I have chosen to present Eau de Gentiane Blanche as the subject of my first review of an actual existing fragrance on The Fragrant Man. I know it is not a new release, which many of us look for when reading reviews, and I am also aware that it is not everybody’s cup of tea in spite of me finding it groundbreaking and spellbinding at the same time. I can’t imagine it being a big seller but Hermès, to their honour, keep it in production and among the many mainstream offers of big department stores. I have tried to convert many of my friends to the beauty that I find in Gentiane Blanche and so far I have had my share of wrinkled nose responses. Hopefully I can do better using the written word.

During my wanderings in Perfume Land I have come to a glorious understanding about perfume, one might even call it an epiphany: IT IS SWEET!

The immediate purpose of fragrance seems to be sweetness and it is so in every culture and every region of the world. Yes yes, I know, there are the occasional bitter materials like incense or myrrh, but they are rare exceptions and usually serve as a counterbalance to the extreme sweetness of the star ingredients. When they serve as a central theme they are usually rendered sweet; it is only natural, one might say. Since time immemorial our ancestors have craved for the sweetness of fruits for nurturing and pleasure, and for the sweetness of flowers for comfort and relaxation. Sweetness in many cultures is synonymous with a pain free existence of luxury or even paradise.

Sweetness in nature is a form of currency, invented by the plants to make the animal world do their bidding. Insects are coerced by their addiction to nectar to participate in the polygamous mating rituals of plants. Mammals and birds propagate and disperse the species that reward them with sweetness – humans are the only ones who do it consciously by planting while the rest do it unconsciously in the most un-fragrant way imaginable.

If sweetness is the carrot of the natural world, bitterness is the whip. Bitter is the punishment that deters. It states that something is off limits. Bitter means poison. Metaphorically, bitter stands for sorrow, parting and death.

Is that so? Well, yes and no. Since ancient times people knew that there is more than one side to all things. Ancient Greeks believed that with everything, good measure is needed. When the right measure is kept, poison can become remedy. When the measure is lost, even food becomes poison. In folk medicine, bitter substances (when used wisely) are said to be the most potent cures. Bitterness is the unpleasant price one has to pay for healing but really, the price is small and when one knows the reward, even enduring some bitterness becomes pleasant. If one has delved into herbalism they come to enjoy the bitterness of herbs and even feel gratitude for that taste.

Gentian, is possibly the bitterest plant in the natural world. If folk medicine holds any value (which it does) it should be a cure-all or even as close as one can get to an elixir of immortality; a mighty claim for such a humble plant.

Eau de Gentiane Blanche plays with all of the above. She is not simply a pleasant and fresh cologne; she is art. She hints to an era when perfume was not simply a way to enhance one’s personal charm but also a panache for ailments of the body and the soul. Ellena has managed to keep her unconventionally un-beautified as only a handful of fragrances are (l’Eau Froide by Serge Lutens comes to mind but not nearly as accomplished). She is as dramatic as a barren landscape and untainted by civilisation and the culture of pleasure as a girl raised by wolves. She walks off the beaten path of sweetness and takes us through a wild and magnifi-scent (excuse my pun) forest in search of the root of immortality. I will not bother you with a list of notes or an accurate olfactive description, there are many good reviews about them anyway. What I will give you instead is a narrative for an imaginary commercial which I think says more of how I see Gentiane Blanche. 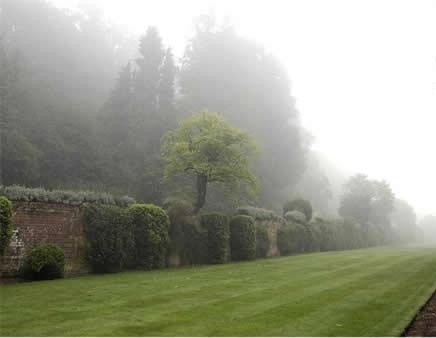 Through an open door with a carved stone frame we get a glimpse to a formal garden in winter and a sky heavy with clouds. The hour cannot be determined. A barefoot figure in a felt/flannel cloak, graphite in color appears, steps out and swiftly runs through an orthogonal patch of lawn. She ignores the stone paved path and crosses the lawn diagonally while the camera follows her from a birds point of view. She reaches the border of shrubs (change of camera angle/close up from behind). She pushes through the wall of plants and we get a kaleidoscopic succession of brief scenes where she is lashed by the branches and she crushes some leaves with her hands in her effort to avoid them, releasing their essences into the air. She reaches a clearing, the dense foliage behind her and an open view in front of her. The clearing lies on the edge of a cliff and from there stretches a barren landscape crossed by a frozen river. In the middle of the clearing there is a pedestal and on it, from a statue, only the feet remain. She approaches the pedestal cautiously trying to catch her breath. She kneels near its base and with her hand reaches for something in the weeds that grow around it. She lets her cheek press against the cold marble for a moment. She uproots the small trophy that she came here for and dashes back into the trees. She makes it back just in time before the storm breaks and enters the building that we now see clearly as a monastery. She makes it through a hall filled with incense smoke and after a while into a big kitchen. There is a huge parchment book on a wooden stand, a copy of the works of Dioscorides in Latin. She leaves the small plant with the singular tiny white flower and some soil that clinged to its roots on the open pages. There is a medieval depiction of the plant and a title. Guess what…I bet Ridley Scott would do wonders with this script! 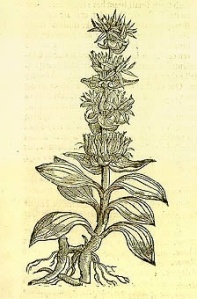 Gentian, or Felwoort Gentiana lutea Gentian was named in honor of King Gentius of Illyria (180-167 B.C.), who, according to Dioscorides, discovered the medicinal virtues of the herb. Ancient and medieval physicians recommended Gentian primarily as an antidote to poison. Gerard noted its use as a counterpoison and as a remedy for “evill livers and bad stomackes.” He also recommended Gentian to “helpeth digestion, and dissolveth and scattereth congealed bloud.”
University of Virginia, Health Sciences Library