Grey Flannel helped to bring about a reconciliation because after asking him what scent he was wearing we went for a talk outside, as the feuding family members stood about, glaring. Perfume as a bridge, an arbitrator.
– The Black Narcissus

Quite obscure now but still available, I didn’t smell this scent for twenty years until my grandfather’s funeral, when my cousin Dominic, who was sitting in the pew in front, had a gentle soap/wood scent that was unusual, beautiful. He told me later that it was Grey Flannel. The happiness I felt at what it brought back to me made me feel almost guilty.
– The Black Narcissus

There has been a bit of talk in the fragrant stratosphere lately about one of my absolute favorite fragrances. I am referring to the bracing violet leaf men’s cologne known as Grey Flannel. I have my own personal story to tell regarding this groundbreaking fragrance. Will you travel back in time with me once again?

It was the summer of 1983 in New York City. I had just graduated from high school and was working part-time in an office in the garment district of Manhattan.

I had always subscribed to the idea that I was surely permitted to wear any fragrance that I truly adored no matter who it was marketed to. One day I chose to wear to work a massive dosage of my newly acquired bottle of Grey Flannel despite the fact that I was a petite blonde haired green-eyed eighteen year old ingénue.

Bear in mind that the atmosphere in this office was downright impersonal, professional and stifling. No one spoke on a personal level, everyone flitted about doing their job until the end of the day when all disbursed and went on with their private lives.

I was at the copier machine when standing behind me a middle-aged family man with a wife and two children suddenly whispered, “Are you wearing Grey Flannel?” I am sure that I turned fifty shades of red and sensing my embarrassment he glanced around first and then responded with, “No big deal. I actually wear Sweet Honesty at home. It makes me feel happy after a long day of crunching numbers”. (For those of you who don’t know Sweet Honesty was made by an American beauty company called Avon and was a sickly sweet scent very popular with the female preteen crowd).

Grey Flannel posing in a garden on a balcony in Japan
Photo: Neil Chapman, The Black Narcissus

At first I was shocked at his revelation, but then a smile crept to my face. What then ensued was a conversation about all of our favorite fragrances from the past to the present.

Needless to say I stopped wearing Grey Flannel to work but my newly acquired acquaintance and I would often plan our meetings at the copier where we would stealthily exchange samples and converse on the subject of perfume.

There were two lessons I learned that day. For one, fragrance should never be relegated to gender stereotypes. Over the years some of my most adored bottles were Paul Sebastian for Men, Vera Wang for Men, Carolina Herrera for Men, Joop for Men and A*Men (owned by my 11-year-old son but he generously shares with me).

The second and more important lesson I learned was that perfume is indeed “a bridge” bringing together the most unlikely of individuals in conversation and comradeship.

Giveaway
Although I have not a drop left of Grey Flannel I would like to offer up two samples from my son’s collection of fragrance: 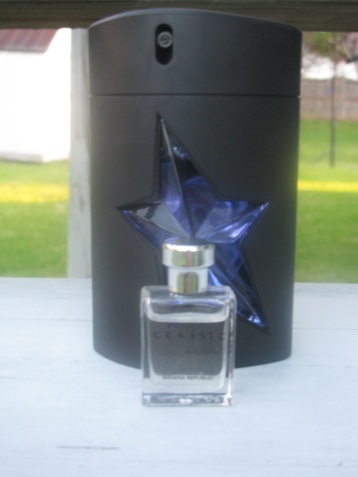 Leave a comment as to whether or not you share or discuss perfume at your place of employment.