In the 1920’s every French restaurant kitchen worth it’s salt and pepper used Kampot pepper from Cambodia, a former French colony. When Pol Pot became the Director, sorry make that, Dictator of Kampuchea he declared Grow Rice, Not Spice, a rhyming but odd domestic policy as Cambodia suddenly had no exports. It used to export this to Europe by the tonne.

Like Champagne, this pepper has geographical appellation status because of it’s unique taste… and scent.

Smell
The Top notes have hints of mint and eucalyptus followed by a floral heart and a base note that can only be described as pepper ++. The smell is enchanting, it is appetite enchancing, this Bordeaux of peppercorns is absolutely aromatic and a taste sensation. 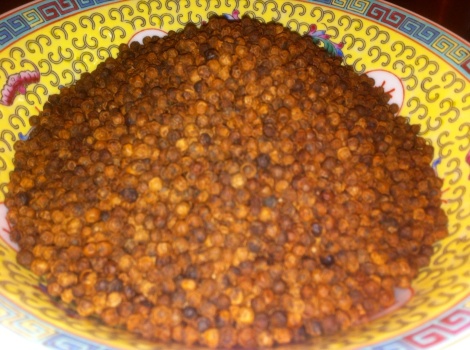 Taste
Add to strawberries macerated in balsamic vinegar to wow your next dinner guests. Rough pound with pestle for savory dishes or freshly grind to sprinkle just prior to serving. Oh, and throw away the MSG that you have hiding back left of your pantry.

Kampot Pepper is the first Cambodian product to benefit from the status of Protected Geographical Indication. The taste and smell is linked to the terroir, rainfall, the local water and traditional Khmer farming techniques.

It just so happens that I was in Kampot recently, eating crab cooked on the beach in nearby Krep, and pepper shopping.

We have 8 Kampot peppercorns to give away!

Let’s make that 8 bags of peppercorns to give away.

In fact lets make that 8 gifts consisting of one bag of red peppercorns and one bag of black peppercorns so that you can taste the differences within this region. I use 2 parts red to 1 part black and words fail when trying to describe the X factor of the red peppercorns. There are also green and white Kampot peppercorns but these were not harvested when I motorcycled into town.

Will you buy banana? Looking after in-law’s banana stall while they negotiated local prices for the pepper. Kampot Market, Cambodia.
Photo: Houv Tang